Much of it was spurred on by the loss of my long-time favorite genealogy software program, The Master Genealogist. Personal problems and age made it difficult to continue, and while there was a huge fan base of seriously genealogist supporting it, there wasn’t a programming fan base to take it over, though a few tried.

I spent a long time evaluating the different genealogy programs, eventually selecting RootsMagic. Part of what influenced my decision was their willingness to embrace former fans of The Master Genealogist, a wise business move.

In December 2015, Ancestry.com announced they were retiring Family Tree Maker software to focus strictly on their online tree version. The genealogy community gasped as many had been using the software for years. I’d considered it but dismissed it as a bit too much fluff, as it was designed to be very WYSIWYG graphic interface without much support for serious research, IMHO at the time. I’ve since reconsidered that decision slightly, finding it improved but cumbersome to use, but still use RootsMagic as my main program. 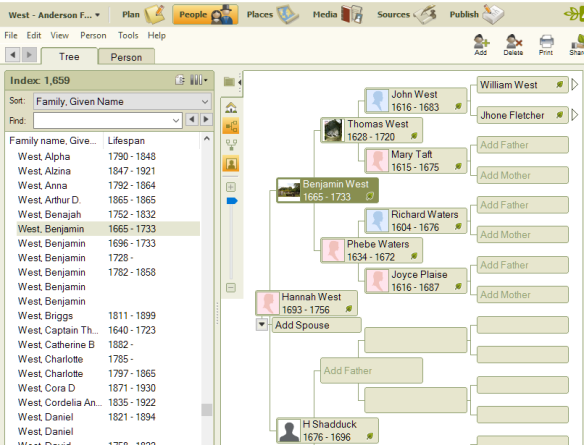 Not long after the announcement, two interesting things happened. First, RootsMagic announced a deal with Ancestry.com to use their API to integrate Ancestry more into RootsMagic much as they currently do with FamilySearch.org. Huzzah! Many Family Tree Maker folks flocked to RootsMagic as the company once again stepped in to help save researchers.

Then The Software MacKiev Company announced they’d bought Family Tree Maker from Ancestry and would continue forward, leaving many thrilled.

Both companies have worked overtime for over the past year to make their features integrate into Ancestry.com’s system, dealing with changes in Ancestry’s API, database structures, and more.

A key difference is that RootsMagic has offered a couple previews and teasers but only once proclaimed an actual “it will be done by” date only to apologize for missing the self-imposed deadline.

MacKiev, on the other hand, has made almost monthly promises that the next update will be out and ready to try and buy. The list of update announcements are on a single post rather than individual ones, so users have to bookmark that post and refresh to find updates since email announcements, etc., are not automatically generated with old posts that are updated, only new. This makes it difficult to track what is going on, and complaints flood the MacKiev Family Tree Maker forums, even to the point of trolls.

Having worked with many software programs and web apps for decades, I learned a long time ago about how to handle updates and new releases. Tease only, make no commitments. People pay attention to those details, and they hate being deceived, even if unintentionally.

I knew from the beginning that this was going to be a huge ordeal for whomever took it on. Ancestry still has a ton of legacy bloatware inside of it, hacks and whacks to make things work with a database that has seen better days. Extracting Family Tree Maker from its bowels left holes, and the APIs needed updating, as did their servers. With integration through APIs with RootsMagic and Family Tree Users, and other companies that want in on the API pie, the number of users smacking the database and servers tests their ability to stay on track.

Yes, MacKiev has worked overtime with alpha and beta testers, and have been fairly transparent (especially recently) about the process at every step and promise. They have put a tremendous effort into this, so it breaks my heart that so many are thrashing them publicly for issues that aren’t necessarily their fault. Blame them for being a little too forceful with their promises rather than fault them for exceptional work to push this through so all of us may benefit. It just takes patience.

Still, lesson should be learned, folks. Be careful with promises you might be able to keep, and keep us happy to be supporting and cheering you and your work on rather than whining about how you haven’t met self-assigned deadlines.

About The Tech Nag

This is where the Tech Nag unleashes her vicious nags upon the tech world.

Nags from Lorelle on WordPress